Aaron Younce is our Rock of Gibraltar here at the shop.  His face isn’t well known to the public, but he’s back in the shop banging out amazing work on a daily basis, with little to no recognition of his stellar work.  Today, we celebrate the man and his considerable skills.

Our friend Ted brought in his Takamine classical guitar with a crazy idea: turn it into a 5-string.  Sure, it sounds simple – but Ted wanted the spacing to be equal across all the strings.  This requires a significant amount of planning and careful attention to detail.  We had to make a new bone nut, new saddle, and make new holes for the strings to pass through on the bridge.

First Aaron removed all the strings, and then filled the bridge holes and dyed the dowels so they blended in with the rest of the bridge.  Next he calculated and laid out the new spacing on the bridge, and marked the location of the new bridge holes on painter’s tape.  Then he devised a setup that would allow for the extra long drill bit to work, without ruining the top of the guitar: 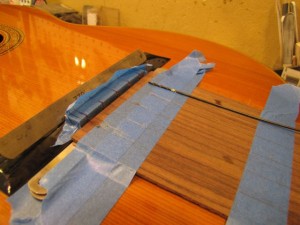 What you’re seeing here is a piece of flat rosewood, set at the correct angle to hit the bridge with a couple of tongue suppressors underneath (that’s popsicle sticks, for the layperson).  He set a metal guard up just past the spot where the drill bit was to come out, so it wouldn’t drill any further than it needed to.

The whole idea sounds easy on paper, but it actually took both Aaron and Geoff to accomplish the drilling: Aaron held the bit down on the rosewood and guided it into the bridge, while Geoff controlled the drill speed at Aaron’s direction: 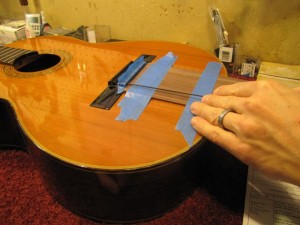 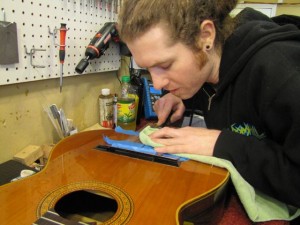 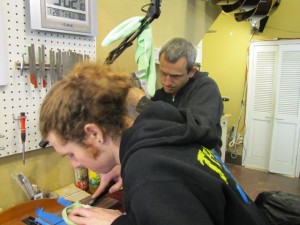 The drill bit kept wanting to jump around on the rosewood, so Aaron had to hold it down with a mighty grip while Geoff controlled the drill speed as necessary.  Not an easy task, but they managed to drill the holes perfectly without a single mishap.

Next Aaron had to make a new bone nut and saddle to fit for proper height and string spacing: 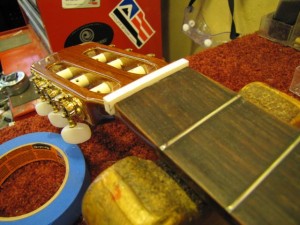 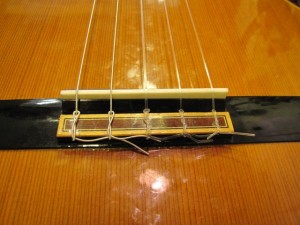 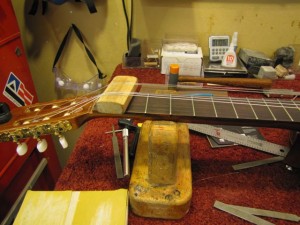 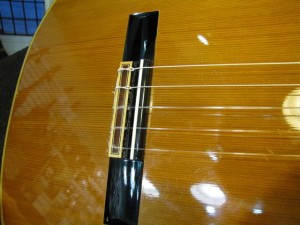 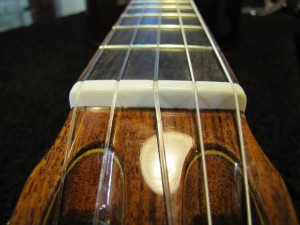 The nut and saddle came out flawlessly, and Aaron then gave the guitar a complete setup; cutting the nut slots to the proper depth, setting the truss rod to allow the proper amount of relief, and setting the action at the bridge to the proper height and radius: 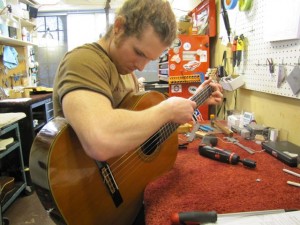 And presto!  Four hours of hard work to remove a single string!  The guitar plays and looks great – Aaron did some damn fine work.  You may not hear him nor see him, but you certainly benefit from his work. 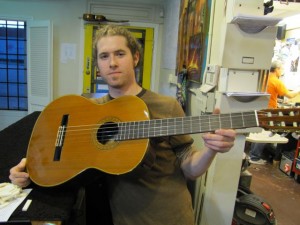 Behold! The soldering iron of justice!