Every once in a while, something really exciting comes into the shop.  Today, our friend Clay brought in his 1954 Gibson Les Paul Jr.  Wow! 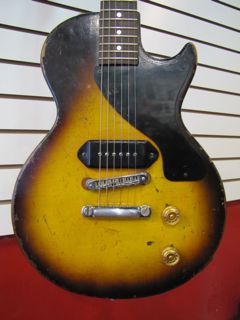 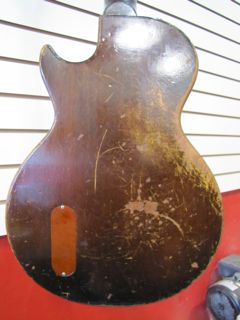 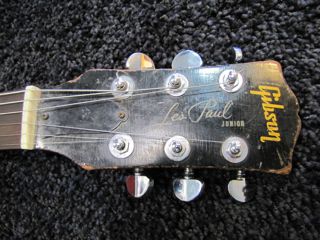 It’s not 100% original – the tuners and nut have been changed and it’s been re-fretted, but who cares?  It’s still 100% awesome.  The finish is checked beautifully, it has tons of battle scars from it’s 55 years of constant gigging, and it’s light as a feather and super resonant.

Clay brought it to us because it was playing unevenly and buzzing all over the neck.  As it turns out, it had been re-fretted recently, and it was a pretty poor job.  The frets hadn’t been fully seated into the fret slots, and as a result there was quite a bit of unevenness with the fret tops all the way down the neck.  We couldn’t just do a fret level to fix this – we’re going to have to re-fret the entire guitar.  This is going to be fun – it’s not often we get to work on an instrument of such vintage.  We’re going to get this thing dialed and playing sweet, and get it back on stage where it belongs!

All frills, all the time.