Take a close look at your guitar neck – you’ll notice that the fretboard isn’t flat.  Most guitar necks are radiused, or curved.  Typically, a guitar fretboard radius falls within a range between 7.25″ and 20″, and some can have what’s called a compound radius, which is typically a rounder radius in the lower frets and flatter one in the upper frets. 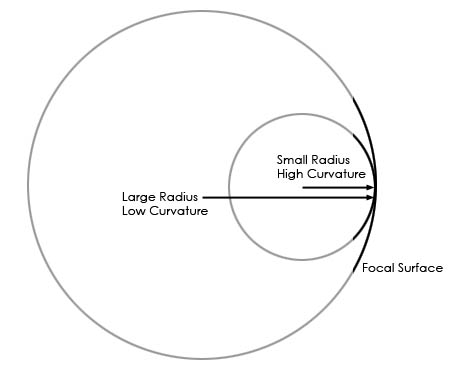 Radius is the measure from the center of a circle to it’s edge – so a fretboard with a 7.5″ radius will be rounder than a fretboard with a 12″ radius, as the circle will be smaller.  In the above picture, let’s assume that the small circle represents a 7.5″ radius (which many Telecasters and other vintage Fenders have), and the larger circle is a 12″ radius (which is commonly found on Gibson instruments).  The Focal Surface represents your fretboard – the larger the radius, the lower the curve, and visa versa.  Why does this matter?  Most players find that a rounder radius is easier to chord, as it fits the curvature of their hand; but most players find a flatter radius easier to play leads on.  Also, rounder boards are typically more difficult to bend on, as the string tends to fret out when it’s bent around the curvature of the fretboard.  That’s why a compound radius is nice – round down low for chords, flatter up high for bending.

Since your neck is radiused, your strings should also match the radius of the board.  If your neck has a radius of 9.5″, and the strings have a radius of 12″, then the outer strings action will be higher in relation to the frets than the middle strings, which may be too low.  If you’re strings aren’t perfectly radiused to match your fretboard, then the playability of your instrument suffers.

During every setup, we check the fretboard with our precision cut radius gauges, and then make the radius of the strings at the bridge match the neck.  We take nothing for granted; for example, Gibson guitars typically have a 12″ radius, but when we measured this Gibson ES335 we found it had a 15″ radius:

Light shining underneath the middle of the radius gauge shows that this fretboard is flatter than a 12″: 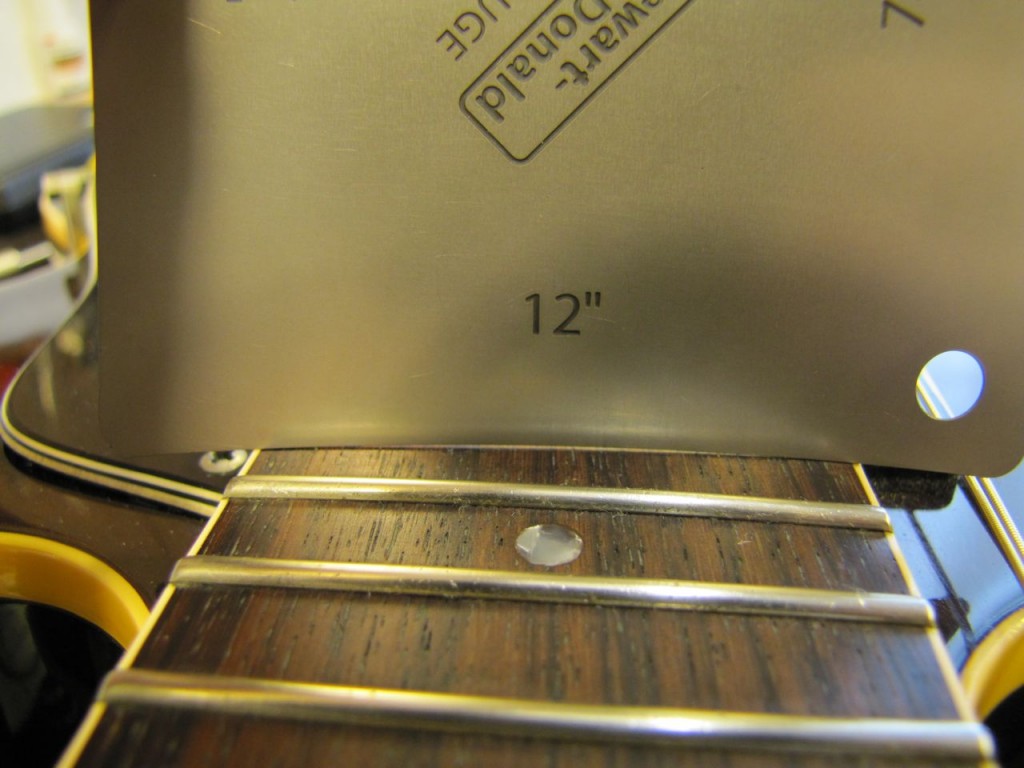 This fretboard matches the 15″ radius gauge: 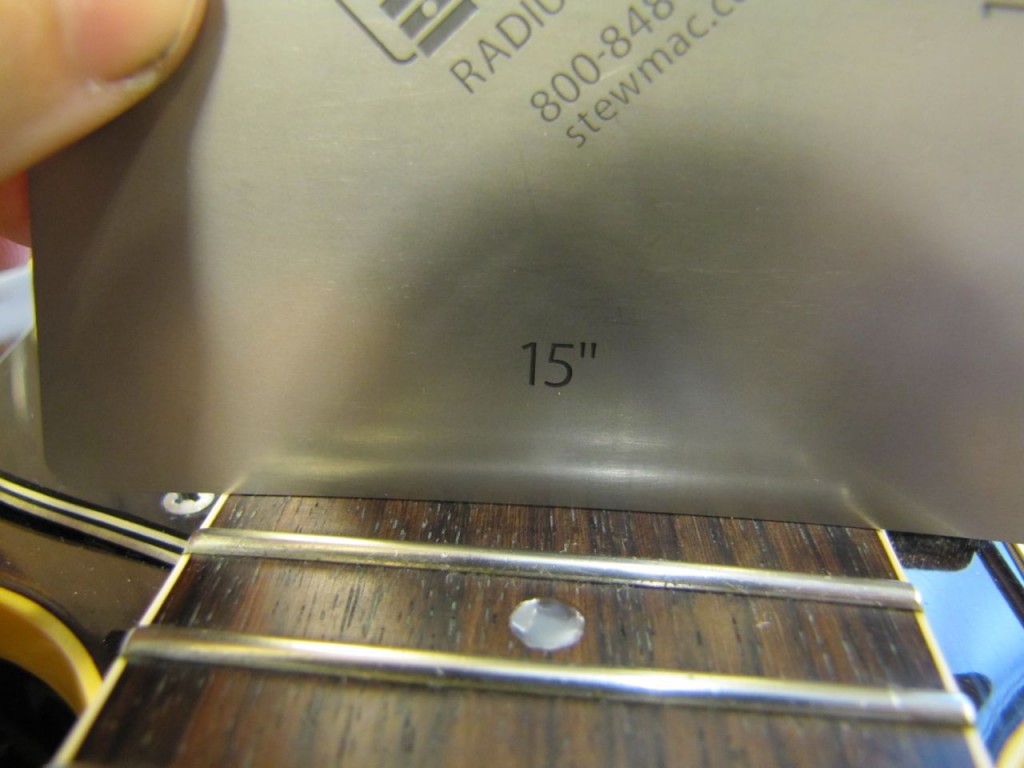 If we had just assumed that this had a standard Gibson radius, the setup would have been completely wrong – the outer strings would be too high, and the middle strings too low. 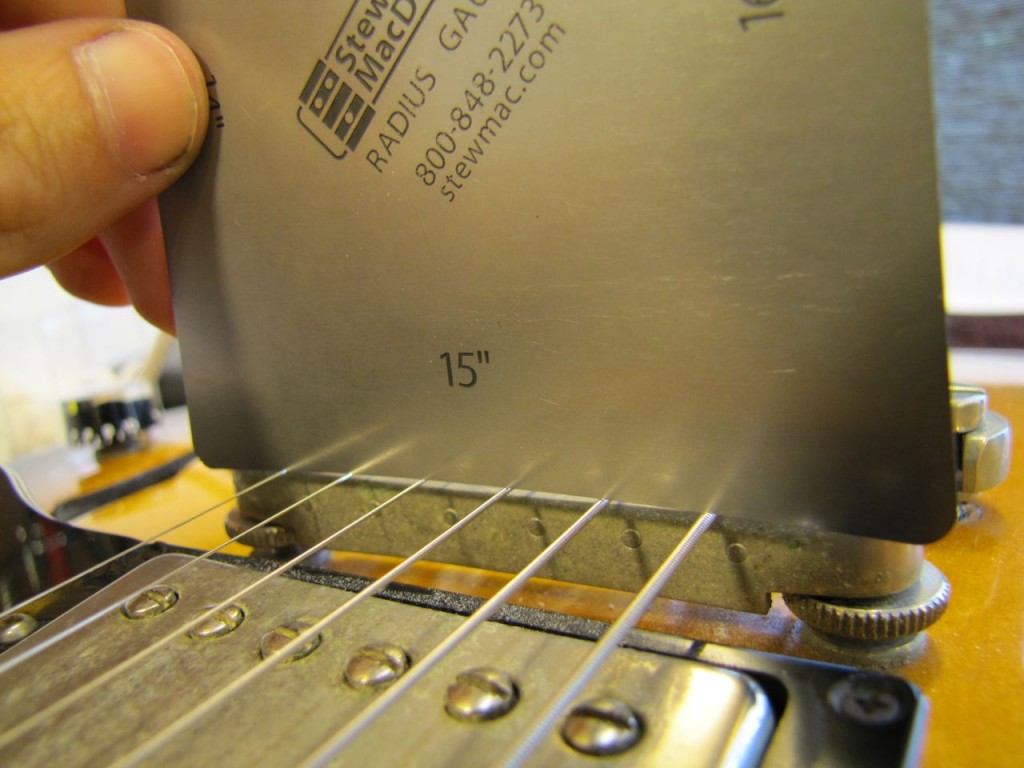 This Gibson’s string radius wasn’t even close to matching the board – no wonder it doesn’t play very well.  During the final stages of every setup, we set the action and radius at the bridge to match the neck.  It’s a tedious process, which involves a healthy level of squinting eyeballs and lots of patience, but the results are well worth it.

Diamond in the rough