Eli wanted something, well… different. He had a vision to transform his Gretsch hollowbody jazz guitar into something akin to an Indian chaturangui, or Pat Metheny’s Picasso guitar (pictured below).  He wanted twelve drone strings across the body and two “chikari” (drone) strings from the headstock to the bridge alongside the neck – all of which would run across sitar bridges, and a K&K transducer pickup to amplify all the additional strings.  We knew going in to this that it was going to be a significant challenge – but we took it on anyway! 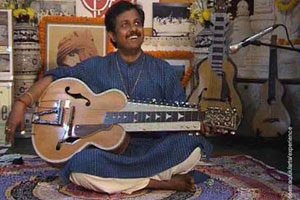 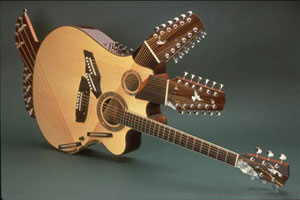 We spent a lot of time going over design ideas with Eli, and came up with a plan that we all thought would work.  Once the plans had been agreed on, it was time to get to work. 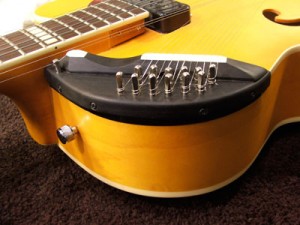 First we stripped the finish and leveled the surface on the upper bout, where we planned to install an ebony cap where the drone string tuners were going to attach. We needed a clean, flat surface to ensure that the glue joint would be strong enough to support twelve strings, tuning keys, and a bridge.  Once we had a flat surface to work with,  we hand carved a solid ebony base, mated it to the guitar top with super strong epoxy and screws, and installed bone string retainers and harp tuners.  This piece blended in so smoothly with the rest of the guitar you’d think it was designed like that straight from the factory. 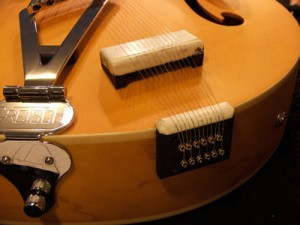 Here’s the floating twelve string sitar bridge & tailpiece/string retainer, which we made out of ebony with a bone cap. This was tricky,  because it needed to match the curvature of the sides of the guitar – having twelve strings wanting to constantly rip it of the body requires the utmost in strength, so we made sure the two pieces mated together perfectly before gluing.  The bridge is positioned so the strings clear the arch of the top by an eighth of an inch, and also drone off of the bone shelf on the bridge, giving it the classic sitar effect.  The drone strings pass under the standard guitar strings, and are tuned from C to B in half-step increments. 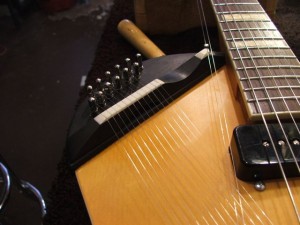 This section of the ebony cap is essentially a break for one of the chikari strings, which are tuned one octave apart from each other and are used to create a drone to play against.  It is tuned from the headstock, but needs a much shorter scale length so it can be tuned one octave above the other chikari string. This solves the problem of needing a much shorter scale length, while still allowing the player to tune the string at the headstock.  We left enough space was here in case Eli wishes to add another one or two strings here in the future.  When modifying an instrument this heavily, it’s always a good idea to think ahead, just in case more mods or adjustments are needed later on. 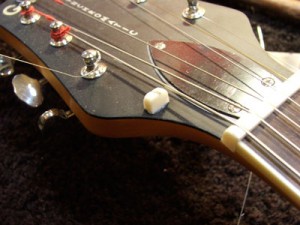 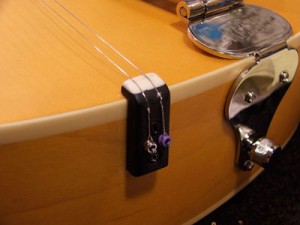 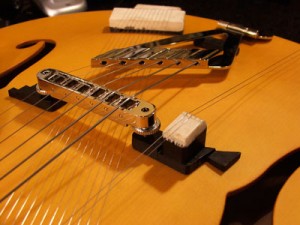 We modified the original Gretsch bridge base to allow the twelve drone strings to pass under the tune-o-matic bridge.  We made an additional bridge (again, out of ebony and bone) to attach to the bass side of the bridge base.  We attached the new bridge at such an angle as to allow the two chikari strings to vibrate off of the bone shelf in front of the string slots, giving a ‘sitar’ effect when plucked.  The two chikari strings were attached via a smaller ebony and bone string retainer close to the tailpiece.

This is probably the craziest project that’s ever come through our shop.  It was a real challenge, but it came out great, and sounds amazing.  Awesome! 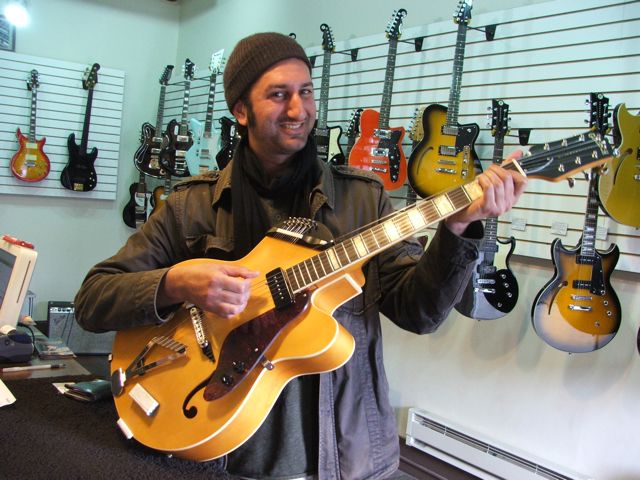