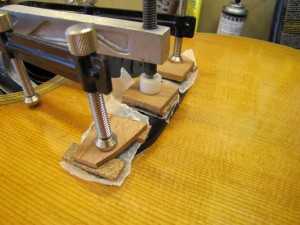 Our friend Paul brought his beloved Martin D-35 in to us for a major overhaul. His guitar was in bad shape: the action was high, the saddle was buried, the frets were completely destroyed, the bridge was pulling up off the soundboard, the binding was coming loose from the fingerboard, and the soundboard was bellied (warped). Paul also wanted to upgrade the nut and saddle from plastic to bone. This was Paul’s first guitar – he bought it brand new at Lundberg’s in Berkeley in 1970. (The money was supposed to go towards his first car he had been saving for, but he bought the guitar instead. We think he made the right choice.) The guitar clearly had some problems, but we’re talking about a 70’s D-35 with a three-piece Indian/Brazillian Rosewood back, Indian Rosewood sides, a Sitka Spruce soundboard and a Honduras Mahogany neck. You can’t buy aged wood like that at Home Depot… It was absolutely worth the overhaul. 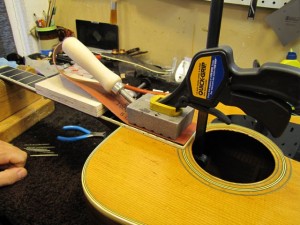 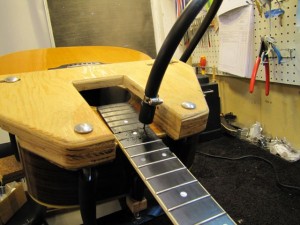 Paul’s neck had pulled up over the years, which caused the action to be very high. This is a commong problem with older acoustic guitars, and to fix this common problem, the neck must be re-set. This involves removing the neck and shaving wood from the heel, increasing the neck angle. This will allow a new saddle of proper height to be fitted in the bridge. We will be able to bring the action down, improve resonance, increase projection, and help prevent bellying of the soundboard. First, we separate the tongue of the fingerboard from the soundboard by heating the fretboard and melting the glue. Next, we remove the 14th fret, which is above the backside of the dovetail joint that secures the neck to the neck block. Drilling two .080″ holes in the fret slot on either side of the dovetail enables us to inject a steam needle into the joint. This is attached to our super secret special steaming tool (ok, it’s an espresso machine), we then put the guitar in our neck removal jig. This secures the guitar body and has a threaded screw with a cap that pushes on the bottom of the heel. When the steam penetrates the joint and the glue become malleable the threaded screw is turned applying pressure to the neck, pushing it out of the neck block. 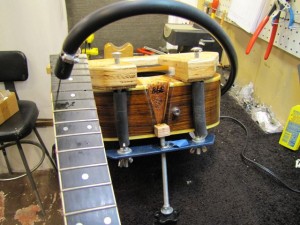 The next step is to clean up all excess glue from both the neck block and the dovetail on the heel. After that, wood is shaved from the bottom of the heel gradually tapering towards the fretboard joint. This is a time consuming process that requires extreme precision, and nobody is better at it than our man Spencer Maki. There are far too many steps to this procedure to detail here but let’s just say that it requires the use of tons of sandpaper, razor sharp chisels, and lots and lots of squinting eyeballs. The basic gist of the process is this: re-cut the sides of the heel to increase the neck angle such that the plane of the fingerboard hits the top of the middle of the bridge. On a guitar that needs to have the neck re-set, the plane of the fingerboard falls below the top of the bridge, causing high action. Once the heel is properly shaved we fit the dovetail with shims, coat the joint and tongue with hide glue, clamp, and wait for it to dry. 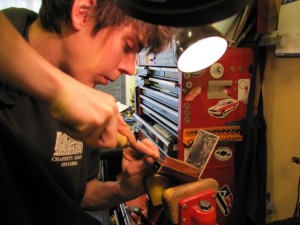 Paul had worn down the frets to the point of no return over the last 40 years, so they needed to be replaced. The frets are carefully heated with a soldering gun, melting any old glue and releasing natural oils in the wood. Then fret pullers are worked under the bottom of the fret wire, gently rocking the fret while lifting. Then we set the guitar on our neck jig (which simulates tension on the neck without the strings on it), and trued the fretboard with a leveling beam. We then trued the radius with our 24″ long aluminum radius beam. Once the fingerboard was perfect, we installed new frets, matching the original vintage size fretwire. Paul’s guitar neck has binding, so we needed to undercut the fret tang to clear the binding. The tang is the part of the fret with small teeth that seat it into the fingerboard. After flowing hide glue into the fret slots, the frets were pressed in with our fretting caul. Then it’s back to the neck jig for a level and dress, and then the final setup.

And we’re done! The guitar came out great, and most important – Paul loves it! Here’s what Paul had to say about it: “It’s as if my guitars came out of a coma… I now have a 40 year old guitar that plays better then it did in 1969, has the deep rich tone that D 35’s should have with a shimmer overtone that gives me chills. You would be jealous.” 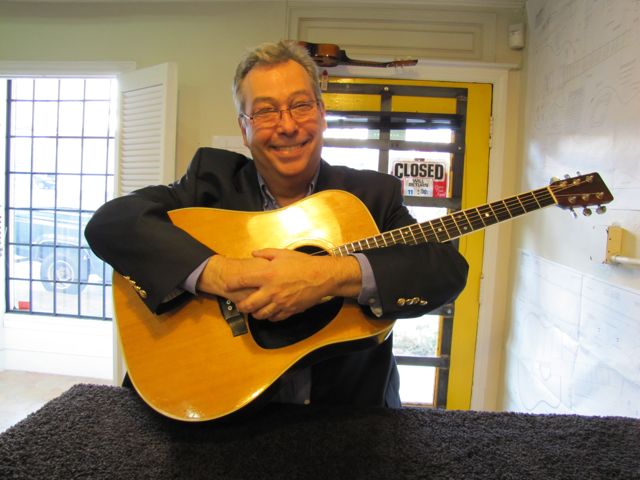