This is definitely one of the more unusual instruments that we’ve seen.  Jesse Hall plays for Experimental Dental School, and he was definitely experimenting with this one!  It started out as a Fender Stratocaster, and ended up with a low bass string, significantly altered tuning, 4 pickups and no body wings. 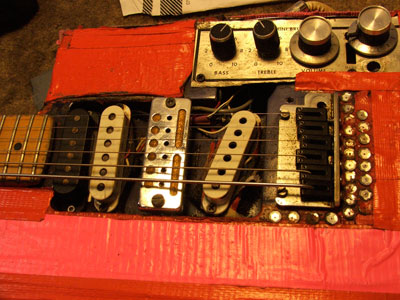 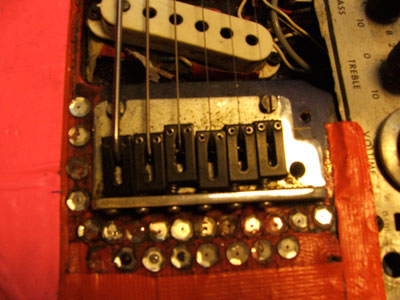 The electronics were, uh… rather interesting.  There’s three separate single coils for the top five strings; plus a separate bridge pickup, which only has one pole under the bass string wired to it’s own output jack.  It was a cool setup, but the electronics were noisy and the components were of inferior quality.  We re-wired the entire control scheme with high quality parts, with three volumes (one for each of the guitar pickups), a master tone, and the bass pickup wired directly to it’s own output jack. 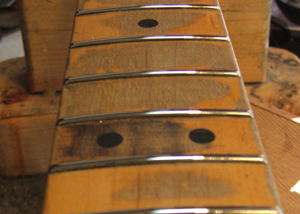 The frets were trashed and it played… well, it just played bad.  Jesse had been to several shops and had been told that there was no way to make it work the way he wanted.  Not so!  We refretted the guitar with Jesse’s choice of fretwire, leveled the frets, and crowned & polished them to a mirror shine.  All fretwork is done on our Neck-Jig for the ultimate in precision; it simulates the effect of string tension on the neck without the strings actually being on it, so we can work under real world playing conditions.

Jesse also had severe intonation issues due to the drastic differences in tuning and string thickness: he tunes this beast D, D, G, C, E, A (.095, .052, .030, .017, .012, .010).  The low string was about a half-step sharp at the 12th fret, and the two high strings were very flat. The bridge saddles were at the limit of their adjustment range, and the intonation was still WAY off.  The existing bridge wouldn’t work: the plate didn’t allow for enough adjustment for the saddles.  We decided to replace the original tremolo bridge with a hardtail, since the plate is longer and does not have the studs in the way. The placement of the bridge would be crucial – it would need to be far enough back to allow the bass string saddle to pull all the way to the back (flat), but not so far that the high string wouldn’t push all the way forward (sharp). 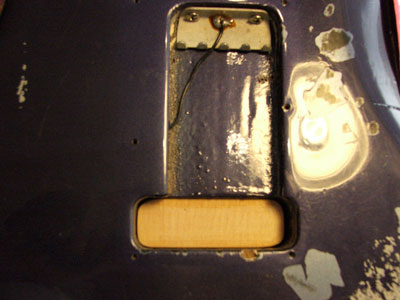 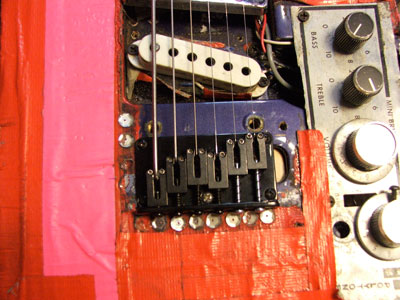 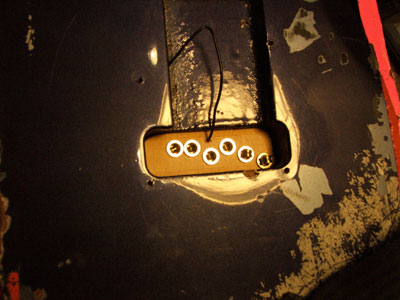 We removed the tremolo unit and made a maple block to fill the tremolo cavity and for the new bridge to screw into.  We would need this to not only mount the bridge, but to allow a place for the string ferrules, as the bridge would be strung through the body.  After determining the proper placement for the low saddle and high saddles, we mounted the bridge.  The stock string holes would not work, so we mapped the placement of the saddles and drilled new holes in the proper arrangement.  Using a variety of different length screws, we were able to perfect the intonation on every string.

Jesse’s guitar came out great: it plays super clean with low action, the electronics are quiet, and it intonates perfectly.  In fact, Jesse had been so used to the guitar being vastly out of tune that he thought something was wrong when he played it at their next show! 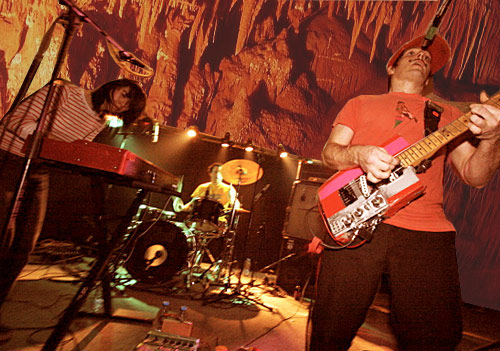