In preparation for the events, we will spotlight the talent of the events each week here on our blog until the series begin. Our first features are Travis Johnson and Ryan Wallace. Both will be playing at our shop on April 11th! 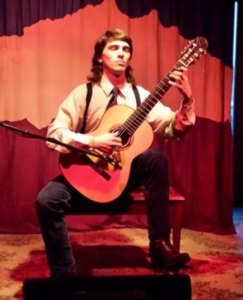 In May of 2015, Travis Johnson will graduate from the San Francisco Conservatory of Music with a Bachelor’s Degree of Music Performance under the tutelage of David Tanenbaum. Other Maestros that Travis has studied extensively with are Michael Partington and Peter Zisa. He has participated in Master Classes with Marcin Dylla, Gabriella Smits, Oscar Ghiglia, and David Russell. Travis had the pleasure of performing concertos with conductor Barry Jekowsky in 2007 as he conducted the Reno Philharmonic and the California Symphony, as well as with Lajos Balogh as he conducted the Marylhurst Symphony and Portland Festival Symphony in 2004. Travis is a vibrant interpreter of various musical styles spanning from the baroque to the modern era.

St. Louis native Ryan Wallace began playing guitar at the age of 13, quickly leading to a passionate devotion to Led Zeppelin and Pink Floyd. Three years later, looking for ways to learn and improve for the betterment of his rock star aspirations, Ryan began studying classical guitar. When it came time for college, he was somewhat surprised to discover he had inadvertently fallen in love with the instrument, much to the detriment of his goal as a rock star. In his undergraduate studies, Ryan studied with Kirk Hanser and John McClellan of the Hanser-McClellan Guitar Duo, graduating with his BM from Webster University in 2011. During his time there, Ryan had the opportunities to play in many masterclasses, including Jason Vieaux, Raphaella Smits, and Olivier Chassain of the Paris Conservatory. After spending the next two years performing and teaching around the greater St. Louis area, Ryan moved to San Francisco in 2013 to pursue his master’s degree. He is currently a student at the San Francisco Conservatory of Music, studying under Latin Grammy award winning guitarist Sergio Assad, where he also works as an audio recording engineer.