Is it a guitar, or is it a control panel for a space-ship?  Here’s a wild wiring job we did this week:

Our friend Charles brought in his Schecter Hellcat VI baritone guitar with some very specific ideas about wiring it with as many tonal options as possible.  His guitar was originally wired with a fairly conventional setup: three mini-humbuckers controlled by a 5-way switch, a master volume, and a master tone.

Charles brought in three Novak pickups (two Jag-Vs and one XII-V), and wanted them installed in a rather unconventional way.  The standard 5-way switch was to be replaced with a Super 5-way –  which is a 4-pole switch – which is then controlled by a separate toggle switch, allowing the 5-way to function in two different ways.  In one position, it functions as a Strat style switch (neck, neck+middle, middle, middle+bridge, bridge); in the second position, it functions a little differently (neck+bridge in series, middle+bridge in series, neck+middle+bridge in parallel, neck+middle in series, neck+bridge in parallel).  If that wasn’t enough, the controls were to be master volume, master tone (which used a push/pull pot to select two different capacitors), and a bass roll-off circuit.  Whew!  Charles thoughtfully provided a diagram detailing exactly how he wanted his guitar wired: 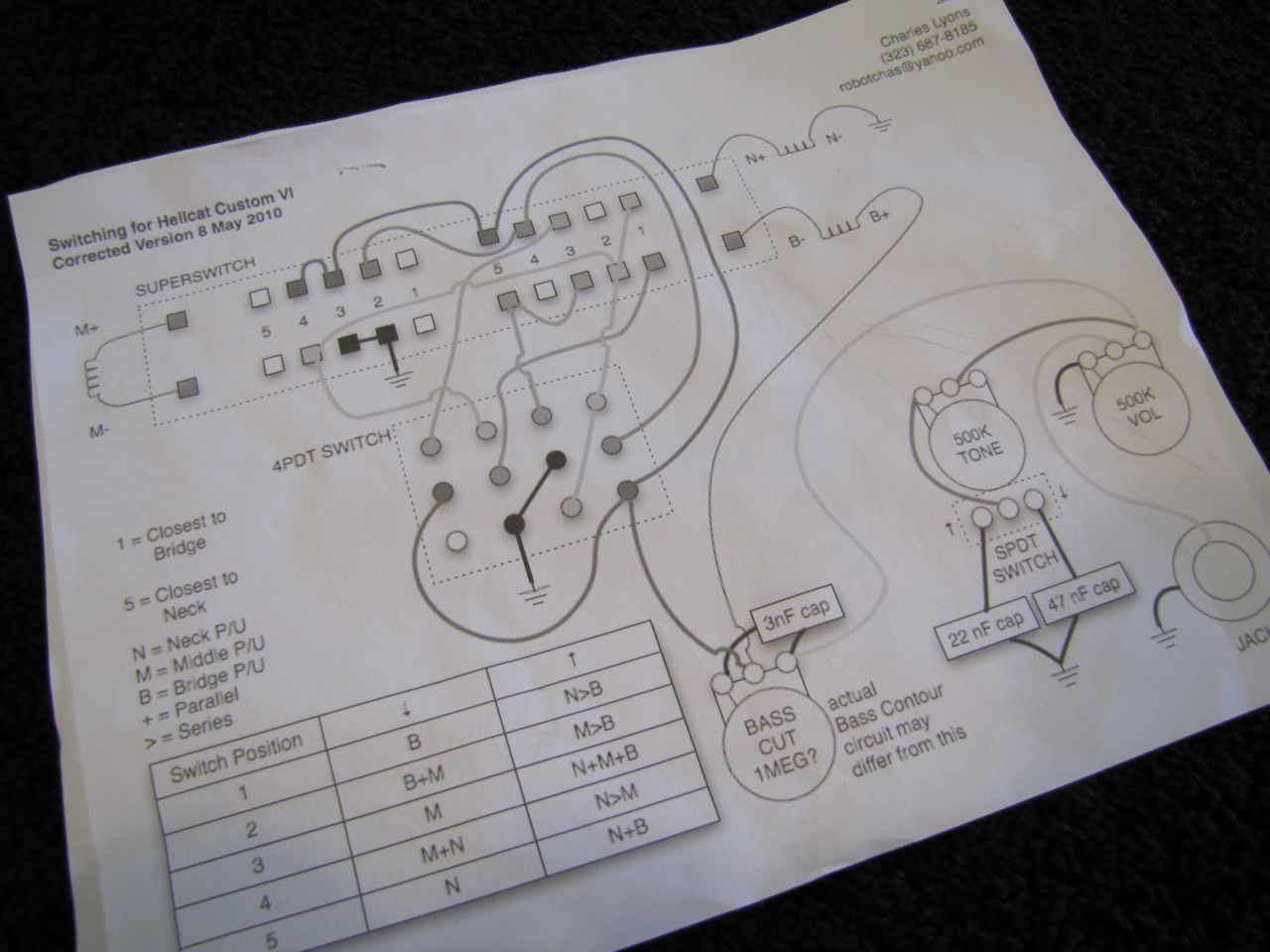 Obviously the original pickguard wasn’t going to work, so we mapped out the new pickguard and had a new guard made for us by Pickguardian.  Once we received the new guard, we shielded the entire control cavity with conductive paint and copper tape, installed the components, and wired the whole thing up.  Check it out: 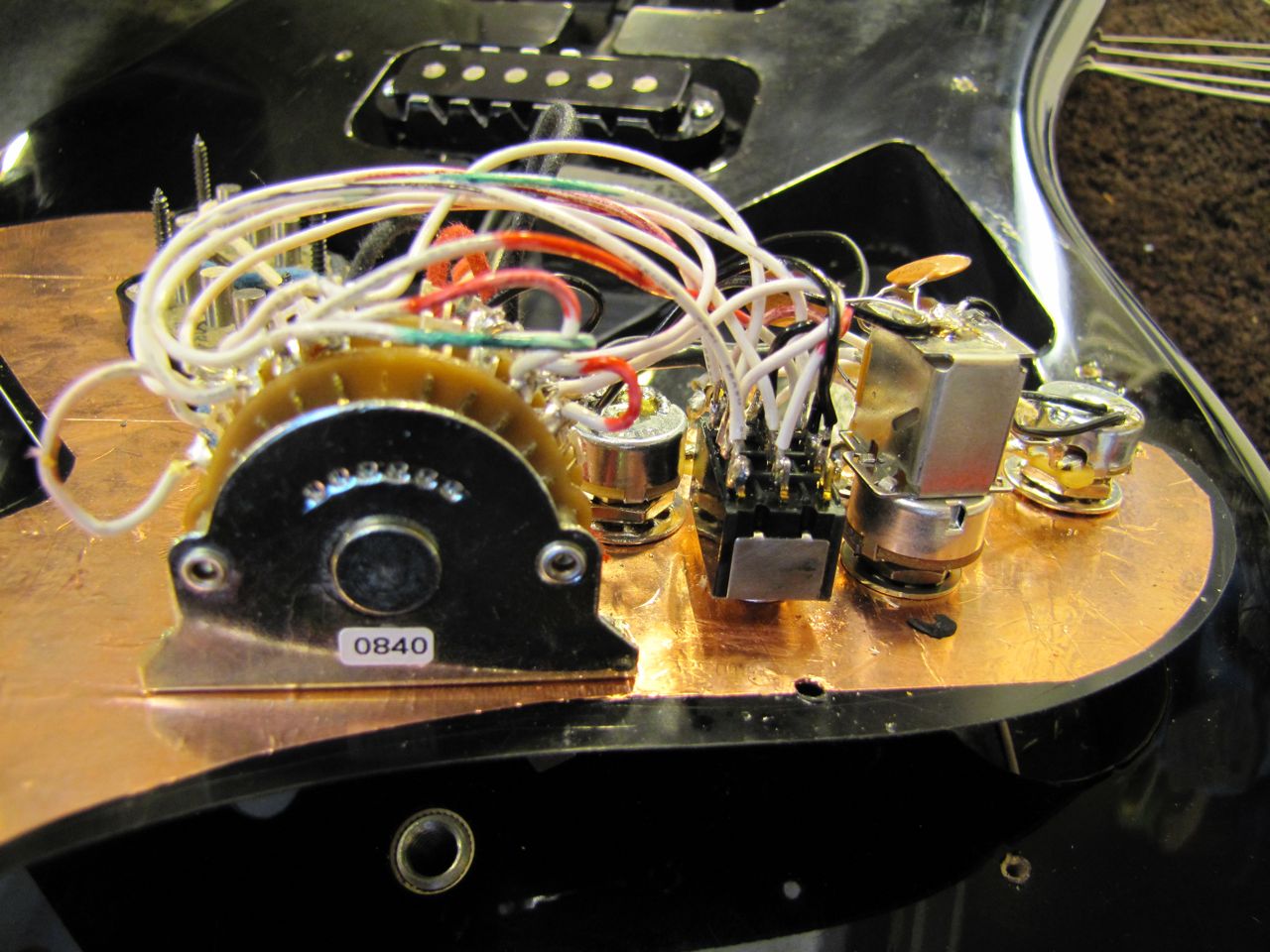 The new neck pickups mount directly to the body, so we placed foam under them to keep them from moving around too much and also for ease of adjustment: 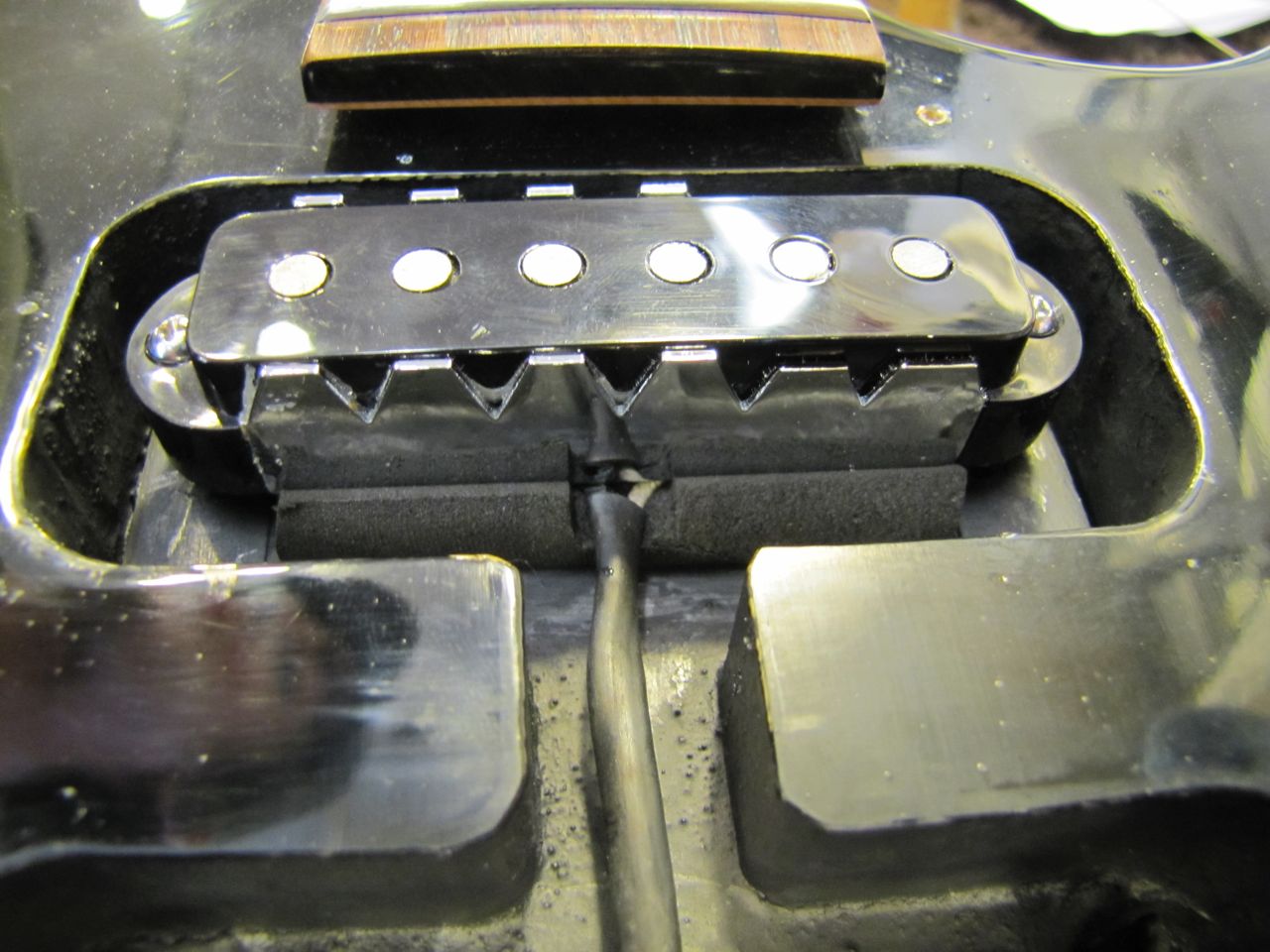 Once everything was completely wired, we installed the guard and strung it up.  Cool, huh? 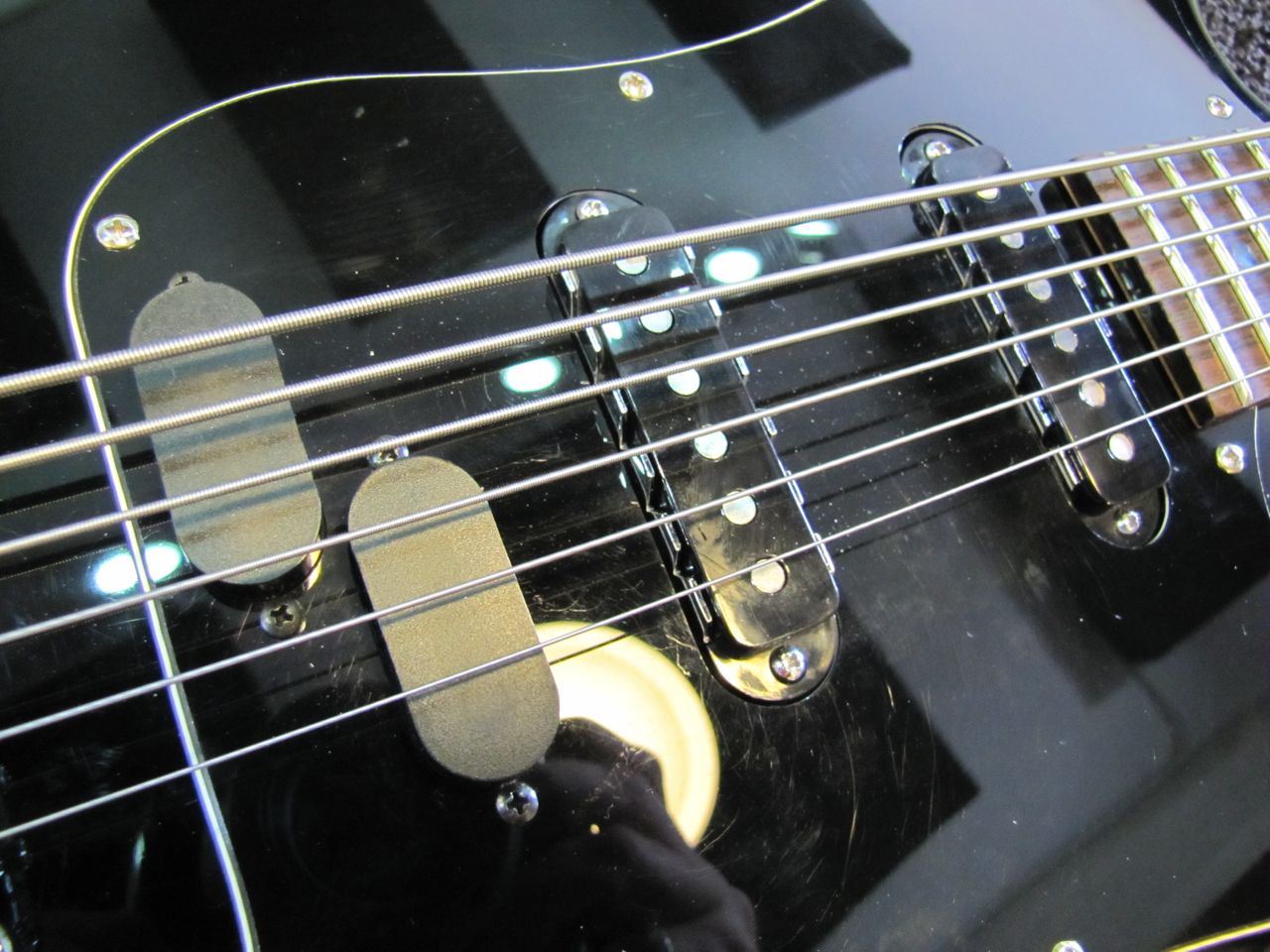 Charles hasn’t decided on what kind of knobs he wants to use yet, so here’s a shot of the controls without knobs: 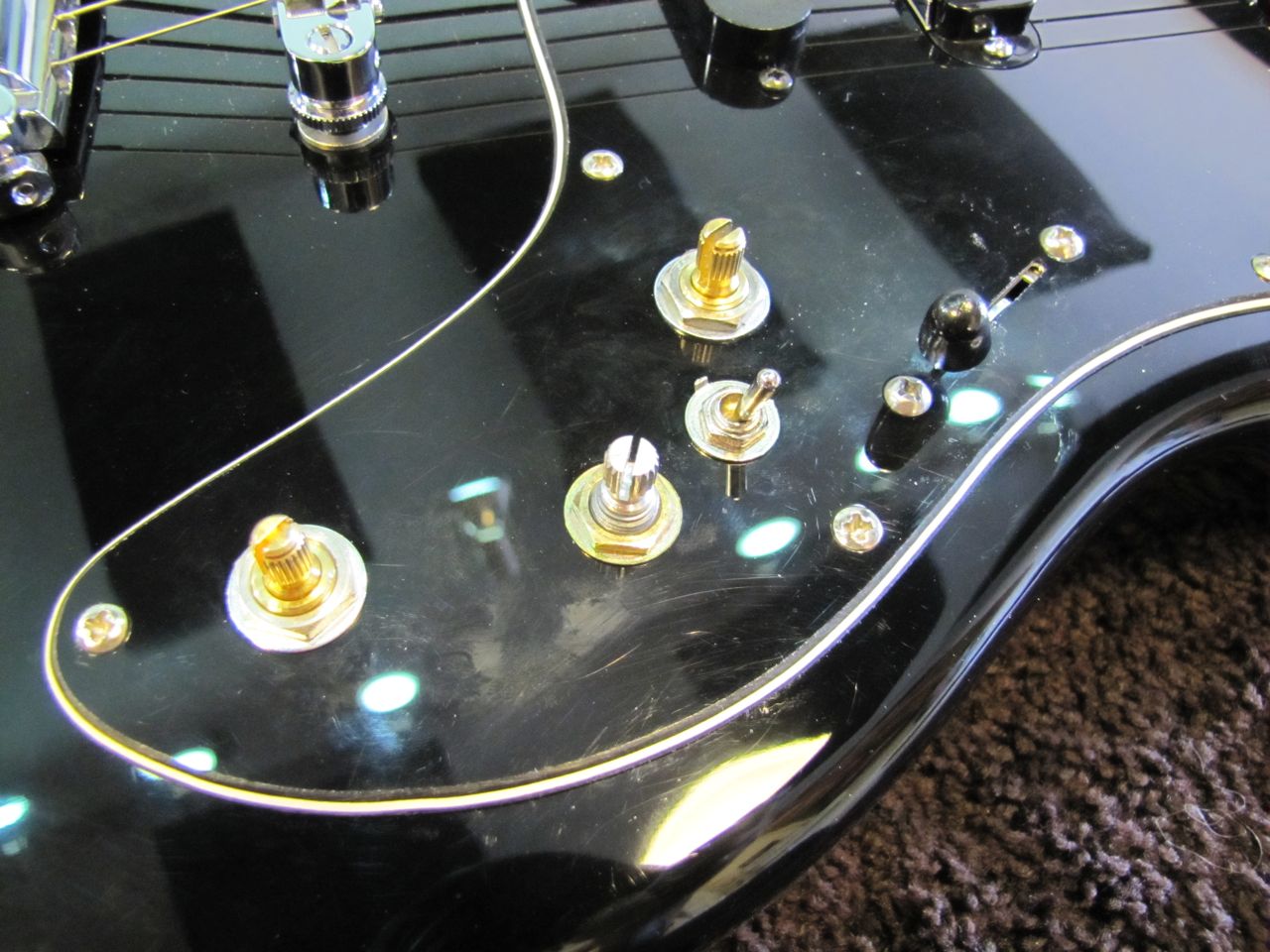 Join us for Sound Pursuits