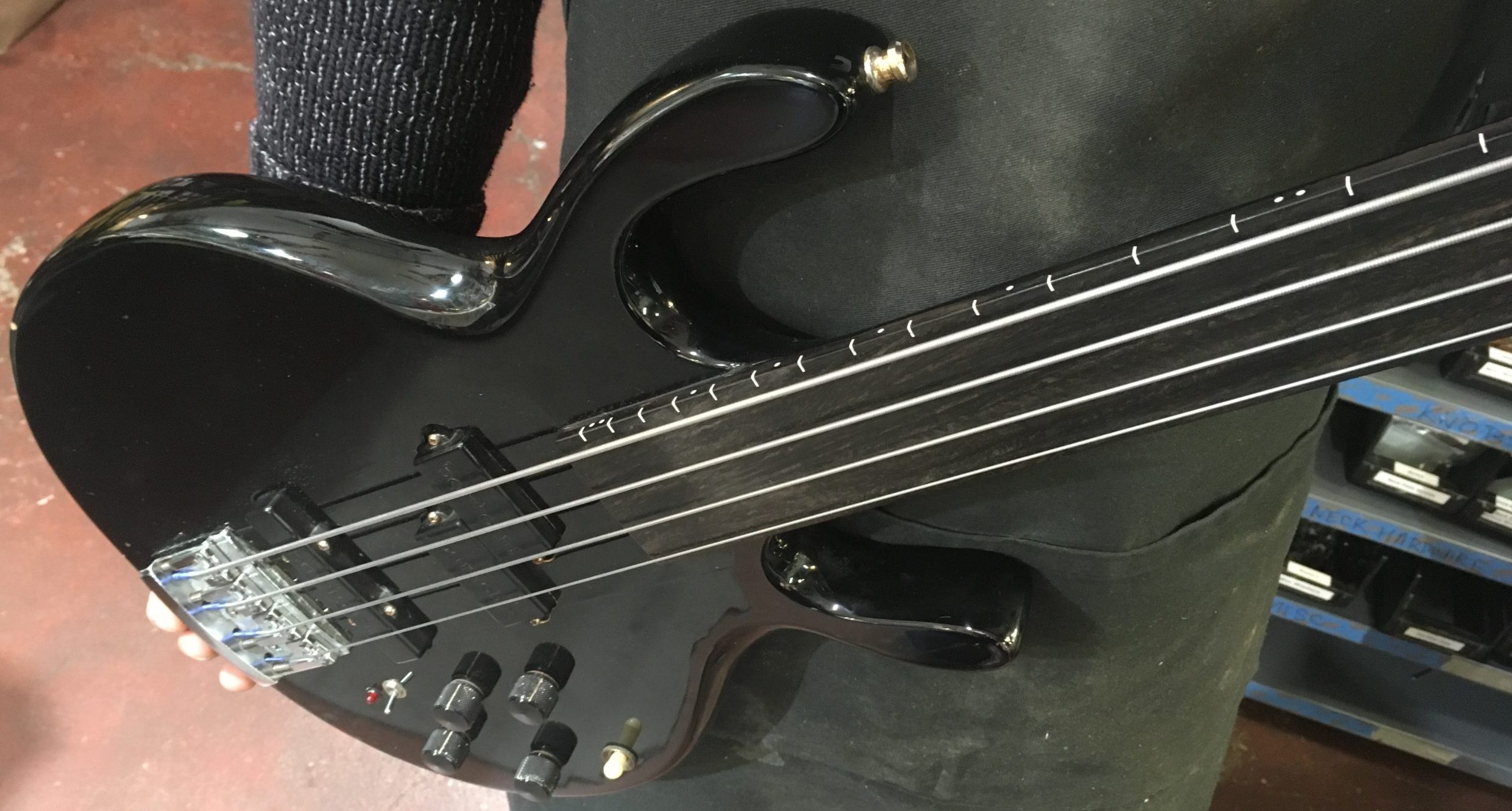 Just before Christmas this past year, I received a heart-warming phone message from Eric Murphy, a long time client of the shop. Eric, who is a guitarist, wanted to do something special for his brother – and best friend – Mark, who is a bassist (and a good one, too). He told me about Mark’s funky old Pedulla, which had a neck so bowed, you couldn’t read the action with a gauge. The thing was literally off the charts.

I figured we’d level the frets in order make the bass playable, but, to my surprise, he told me that what Mark really wanted was full fretless conversion and board replacement. Honestly, I was a little blown away. What an amazing gift. What a great brother!

The fretless conversion is one of our favorite processes here at the shop, and not just because we’re fans of Marcus Miller and Jaco Pastorius, but because it’s amazing to see an instrument transformed into something totally new. Plus, let’s be real, going fretless adds a whole new dimension of funk to a bass.

Over the course of an instrument’s life, wood often changes shape causing the instrument to shift. Mark’s bass is a more extreme example. The neck had become quite bowed and the adjustment of the truss rod was completely maxed-out, leaving no room to flex the neck back into its ideal relief. To remedy this, Tomm needed to heat press the neck back into shape. When a neck is put under heat, the glue joint between the fingerboard and the neck itself is softened, allowing the neck to be flexed into its proper relief. 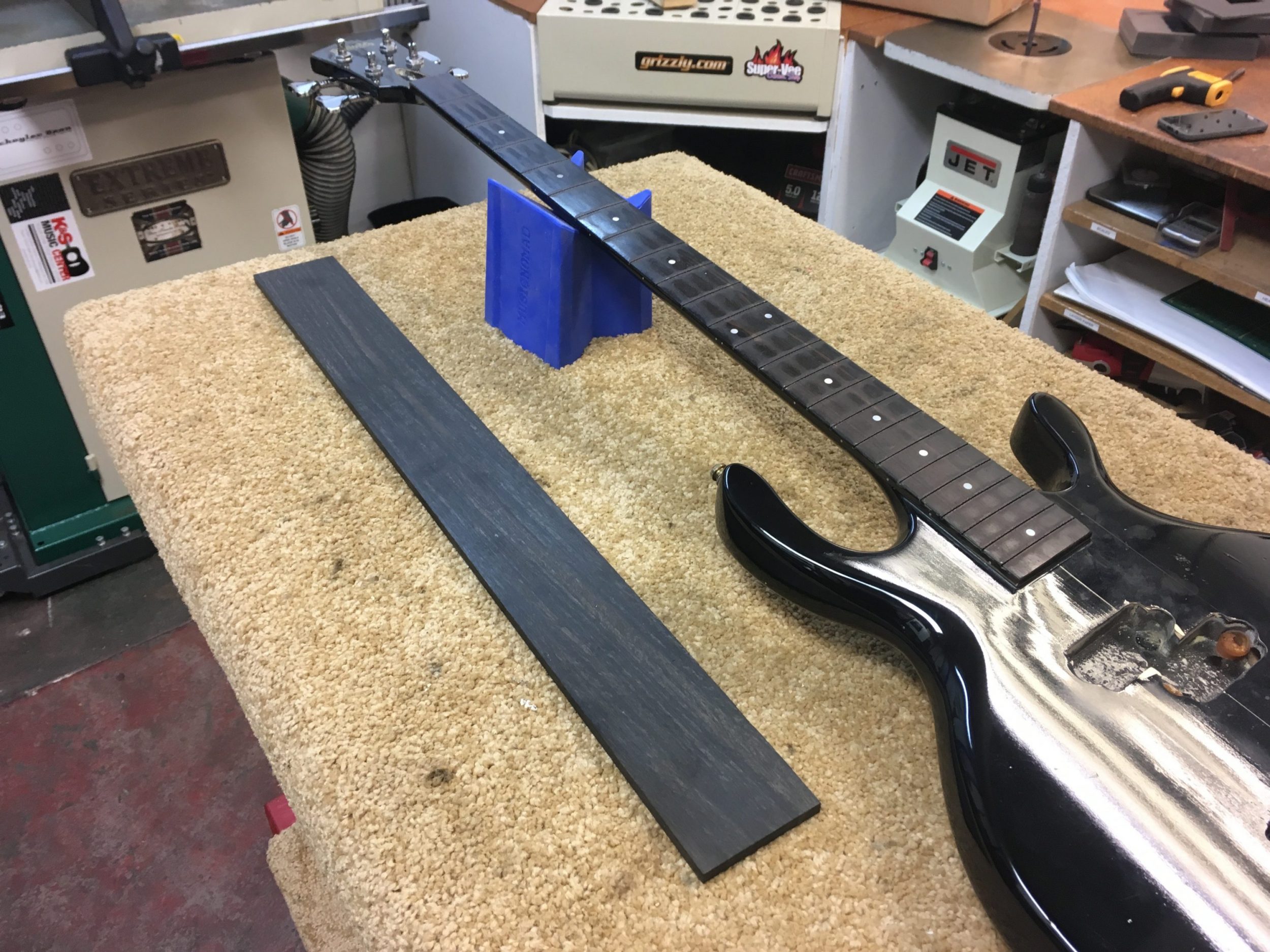 After the heat press, the frets were pulled from the fretboard. Once the frets were out, the bass went into the Plek machine for it’s initial scan. This scan allowed us to see exactly how tall the original board was and how much material we’d need to plane off.

Using the Plek, we removed .160” from the neck, taking off the old board entirely, making sure that we were left with a perfectly flat mating surface for the new board. To be absolutely sure that we’d have a flush mate between the neck and the new fingerboard, we sanded the neck with some 800-grit sandpaper. 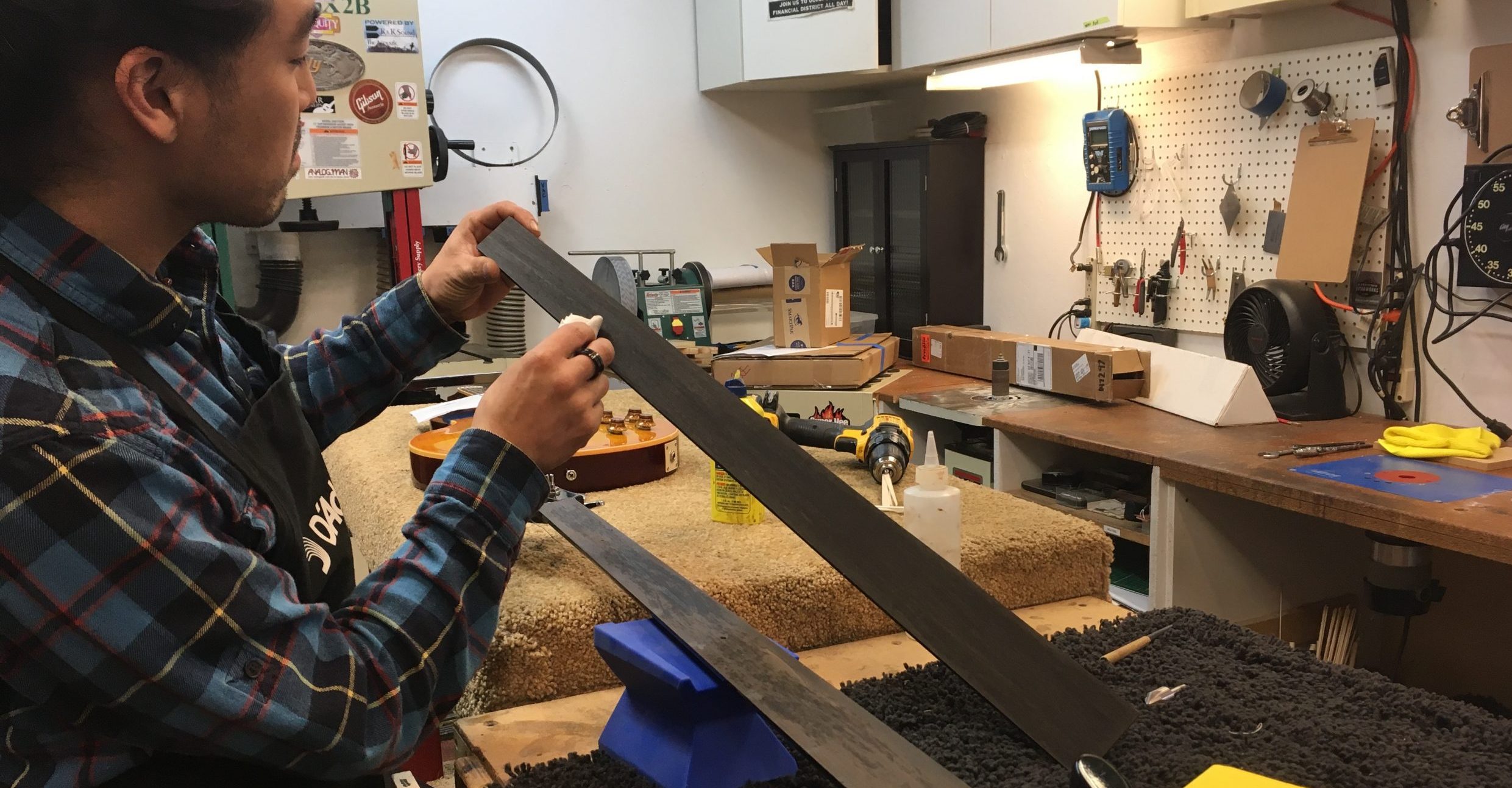 Once we were certain the two pieces of wood would bond without issue, Tomm and Jake tag-teamed a major clamping maneuver. To adhere the new board to the neck, they used very strong, but flexible, boat epoxy. It took A LOT of clamps! Once the new board had a few days to sit under pressure it was firmly attached to the bass. At this point, Tomm took a rasp to the sharp outer edges of the new board, rounding them over into the neck for hand comfort.

The bass then went back into the Plek so the board could be planed to thickness. The goal was to ensure that the new board retained the height of the original, so we cut it down to .160” high, resurfacing the board. It was then cut to a 16” radius. 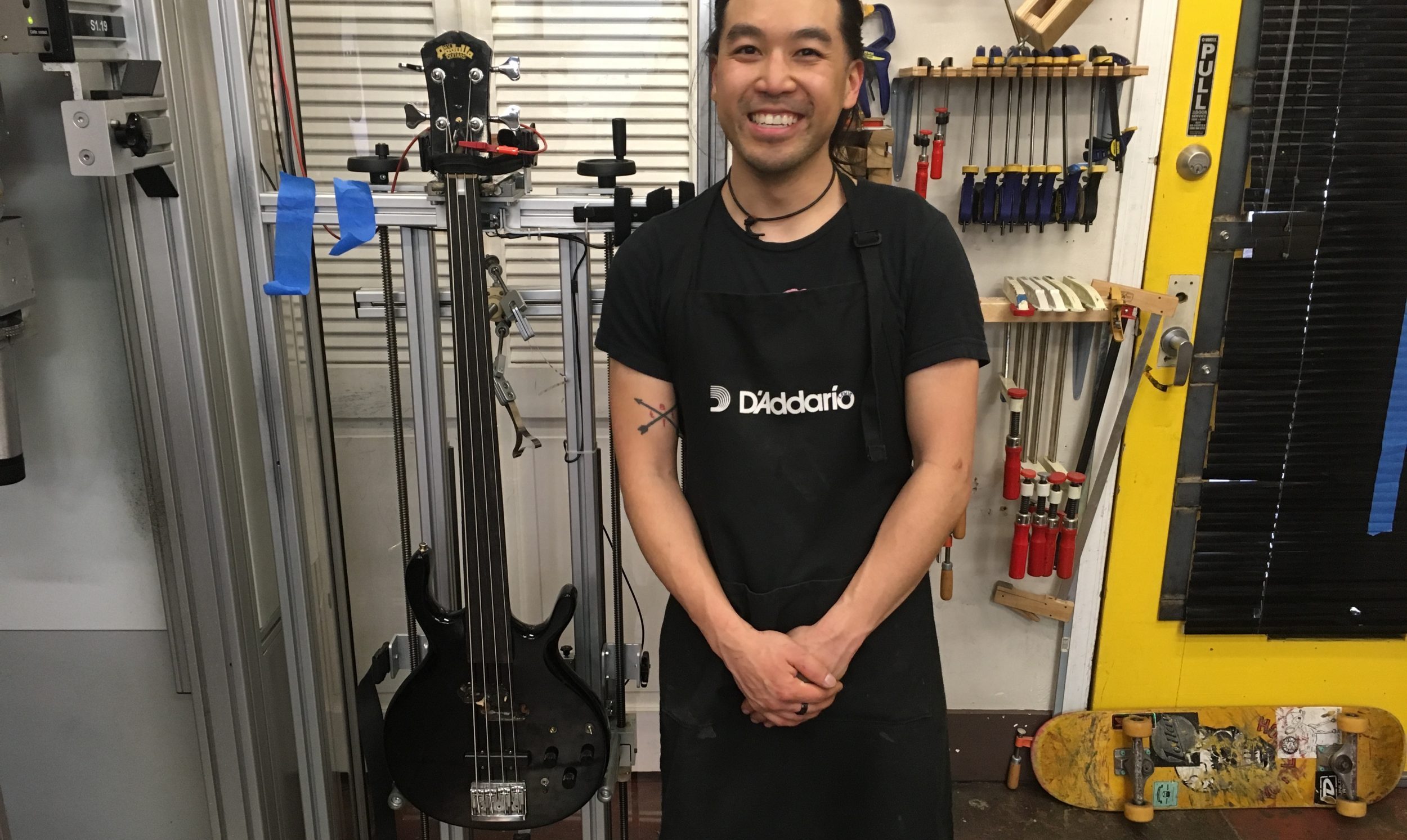 The final phase was to add tiny fret markers into the top of the board for ease of note location. The PLEK was used to cut mini fret slots (about 1/16” long) into the top edge of the fingerboard which were then filled with white plastic inlay material. White side dots were also installed. 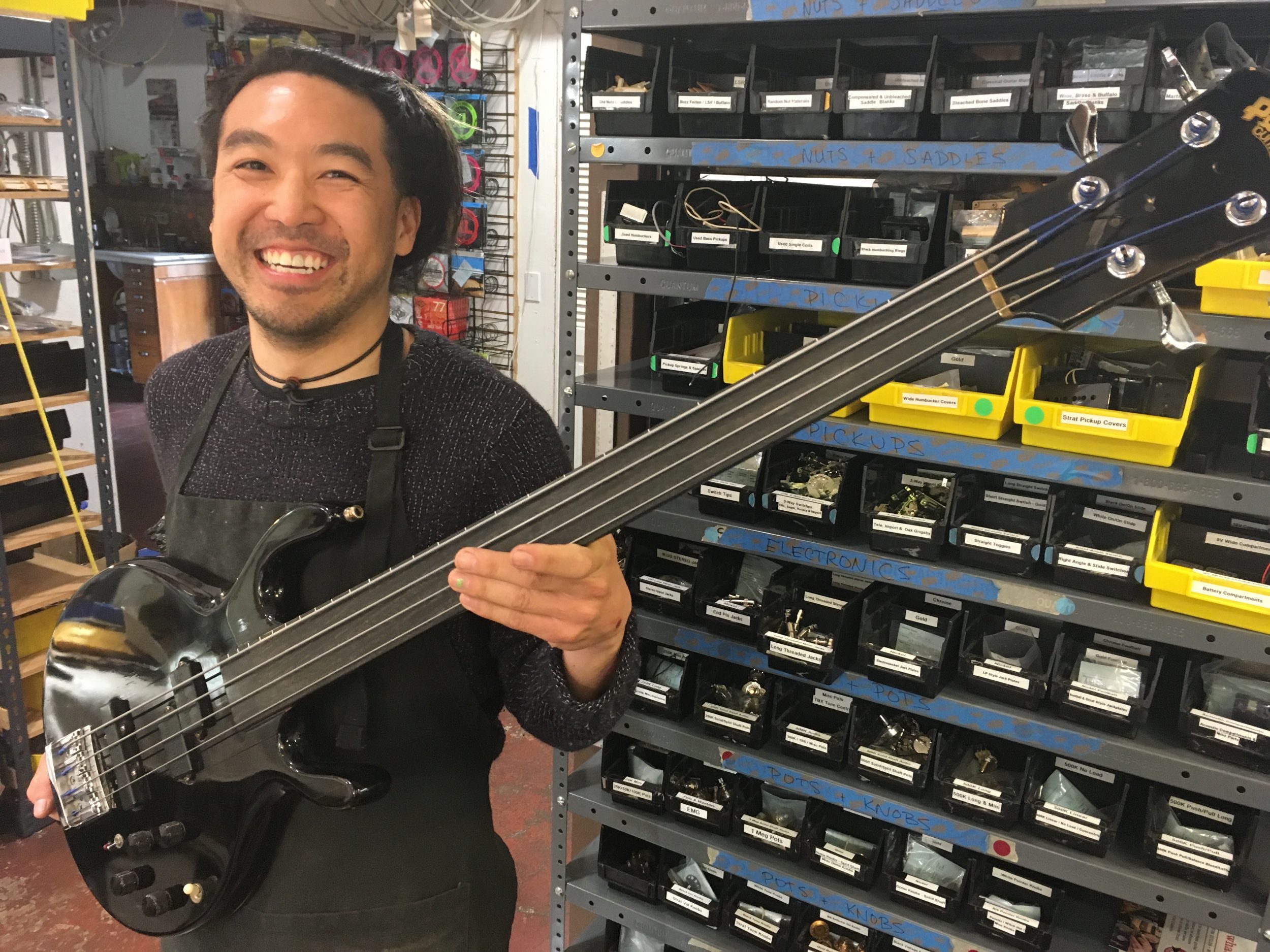 The bass turned out absolutely incredible. Always feels good to take a completely unplayable instrument and turn it into to something totally dialed, especially when it’s a gift between brothers! What a cool transformation – thanks to the Murphy bros for giving us such a fun project. Here’s to more funky times at SFGW!

See the final product in action!